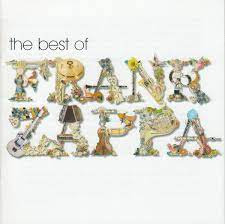 I knew a guy who had over 40 Zappa albums. He had also worked as a dentist which therefore made him a sadist as well as a masochist.

Was Frank Zappa a genius or a chancer?I'm veering towards the latter . While there are a couple of  good songs on this album there is also a lot of nonsence much of which is pretty misogynistic in nature. Described by Robert Christgau pretty accurately  as sexist adolescent drivel  There could be an argument that it is of its time but I can't think of too many other acts who came away with as many (possibly intentional) offensive songs as him.

For this reason and the fact that most of the music does not impress me much this one will not be a keeper which is a pity as it would have taken the Zs on the shelves into double figures.( 5 Warren Zevon, 3 Zutons and 1 Andrea Zonn if you are interested)

Here are two of the non offensive and better songs