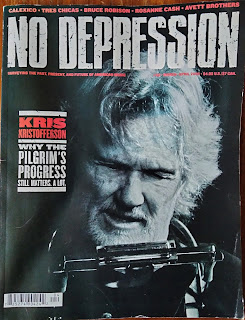 No Depression - The Bi-monthly Journal of Alt- Country
#62 March -April 2006
Today sees the final instalment of this series. We started out on 15th August last year with #32 March -April 2001 featuring Billy Joe Shaver.
30 additions later we reach March -April 2006 with the great Kris Kristofferson as cover star.
The date symmetry is nothing more than a fortunate coincidence. It just seemed like a good place to stop. It wasn't cheap importing this magazine from the States and I wasn't devouring it as thoroughly as I used to.
This series has resulted in me opening most of them for the first time in years. I must confess that I haven't gone through them in any depth and I am now faced with the quandary as to whether I keep them or either try to sell them or give them away.
The lead article notionally features This Old Time a 2006 album by Kris on New West Records. I don't have it but it seems that it takes a retrospective and reflective look at what he deems to be the most important elements of his life and the article goes down those roads.
Many of you will be familiar with the back story - Rhodes scholar to Oxford , helecopter pilot, disowned by his family for working as a janitor while trying to pursue a musical career, meeting Johnny Cash, marrying Rita Coolidge, becoming famous.
There are those who would say that his best song is Me and Bobby McGhee but that is a bit like saying Glen Campbell's best song is Rhinestone Cowboy when the dogs in the street know it is actually Wichita Lineman.
No, Kris' best by a country mile is Sunday Mornin' Comin' Down and I'm willing to fight anyone who thinks differently. The Pilgrim:Chapter 33 also gives a fairly good whistlestop tour of his lifestyle back in the day.
We had the privilege of seeing him very briefly on two occasions at Celtic Connections in 2016 when he did a cameo appearance with The Chieftains and a few songs as part of the Roaming Roots Review.He was quite frail as he had been suffering from Lyme disease but he still had a huge aura and presence.
For my final One from the Top I'm going for Calexico as a fine example of Alt Country.
I enjoyed doing this series (hope you did to) but am quite glad that its now over.
Kris Kristofferson -Sunday Mornin' Comin' Down
Kris Kristofferson - To Beat the Devil
Kris Kristofferson - The Pilgrim : Chapter 33
Calexico - Battle of Cable Hogue
Posted by Charity Chic at 08:00