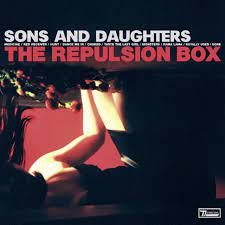 I'm not sure how many of you out there remember the Scottish band Sons and Daughters. They were on the go from 2001 to 2012 which is much longer than I thought. During this period they released 4 albums  (or 5 if you count the re-issue of the debut Love the Cup) all on the Domino label.
I have two of them on the shelves the afore mentioned Love the Cup and  The Repulsion Box their second album released in 2005 when it reached number 70 in the UK albums chart. It also led to an invite to tour with Morrissey on the first part of  his UK tour.
The personnel were Adele Bethel  on vocals, guitar and piano, David Gow on drums, Ailidh Lennon (who is married to Roddy Woomble) on bass and Scott Paterson on vocals and guitar.
They have a bit of a garage rock feel about them and maybe  could be described as a grungier version of the Detroit Cobras all of which obviously is no bad thing.
Dance Me In was a single from The Repulsion Box and is an excellent choice given that it is an absolute belter with maybe a hint of Franz Ferdinand in places.Monsters isn't to shabby either.
Sons and Daughters - Dance Me In
Sons and Daughters - Monsters
Posted by Charity Chic at 08:00