Albums on both Vinyl and CD -Nights to Forget 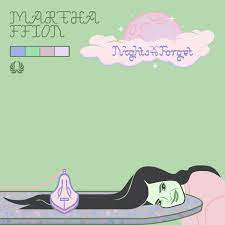 There is a simple explanation as to why I have both a vinyl and CD copy of Nights to Forget the 2020 album by Martha Ffion. It is because the good people of Lost Map, the record label from the Isle of Eigg run by Johnny Flynn AKA The Pictish Trail, saw fit to provide a CD copy with the vinyl album. As I bought it off Bandcamp I also received a digital copy which made for a perfect hat trick.

Claire Martha Ffion McKay from Warrenpoint in Northern Ireland but  is based on Glasgow's Southside and is married to Craig Angus the front man of label stablemates Savage Mansion .

Nights to Forget is her second album following on from 2018's Sunday Best which was released on the Welsh independent label Turnstile Records and which was nominated for the Scottish Album of the Year (SAY) award.

She has been out and about in Glasgow recently trying out some new acoustic  material so some new music is hopefully on its way. File under Quirky Indie Pop

Martha Ffion - After the Fact