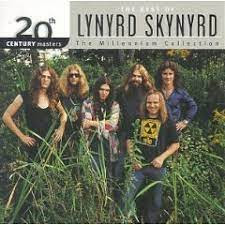 2022 Charity Shop Purchases #23 -Lynryrd Skynyrd - The Best of Lynrd Skynyrd -The Millenium Collection
There had been a distinct lack of big game during our recent safari until we reached the final water hole on our journey Sue Ryder in Newton Stewart.
Among the dross and usual suspects there were a number of Best Ofs  of mainly rock bands from the late 60s/early 70s. When I took a selection to the counter I commented to the chap that it was unusual to see such booty in a chazza. He replied that his cousin had handed in about 200 or so and that they had been flying off the shelves.
Thats the next few Fridays sorted then. First up is the vowelless Lynryrd Skynyrd. I'm sure you all know the history of the band. Named after one of their teachers Leonard Skinner who was always on at them about the length of their hair they are probably famous for two songs Freebird and Sweet Home Alabama. Sadly two members Ronnie Van Zandt and Steve Gaines and four others died in a plane crash in October 1997. The band continued but were never the same.

To be honest the songs on the album are not much cop with the exception of the two above and Swamp Music. Given that I have the first two on  a picture disc it may not necessarily be a keeper. In any case as  Rol will testify you are better off with the Drive-by Truckers and Southern Rock Opera