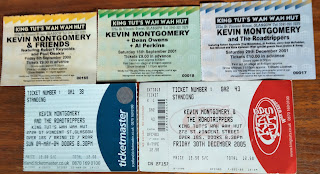 I've probably seen Kevin Montgomery more times at King Tuts than any other artist. Certainly any other headliner as I have also seen the Radio Sweethearts and the Felsons as support on many an occasion

I've definately seen him more times than those listed above and I suspect at least once in 2002 and in 2003. My pals and I would make his December concerts our Christmas night out.

I know for a fact that I saw him play with the Road Trippers  on Friday June 27th  2003 as this was the date  of their Live! From Glasgow album released in 2005 on Road Trip Records.

The Roadtrippers on this occassion were Robert Reynolds on bass , Paul Deacon on drums (if you recognise these two names that is because they are members of the Mavericks), Mike McAdam on guitar  and Al Perkins on pedal steel who has played with the great and the good of Country Music.

On this occasion they were supported by singer songwriter Carter Woods. As you can see from the tickets above they have also been supported by Dean Owens and on at least one occasion Jill Jackson.

By choosing Glasgow, and in particular King Tuts for their live album, it shows that they hold the venue and the audience in high esteem. They have a faithful audience who know the majority of the their songs and enjoy singing along in particular to Fear Nothing which normally ends the evening. You are guaranteed a great night out

Kevin still pops up in Glasgow from time to time but usually not at King Tuts or with such regularity. I haven't seen him much beyond 2005 but I'm happy with my memories.