Keeping Up With the Joneses - Sharon 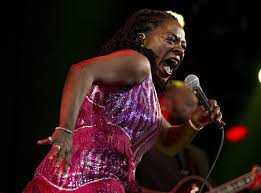 The final Jones on the shelves is the late great Sharon who sadly died from cancer in November 2016 aged just 60.

She was the pocket rocket front woman of the band Sharon Jones and the Dap-Kings who recorded about half a dozen albums on the great Daptone label from Brooklyn. Incredibly she only released her first album at the age of 40 but she left an impressive legacy in a relatively short period of time.

Sadly I never got to see her live.I'm sure that she and the band would have put on a great show. I've just read that she was sometimes referred to as a female James Brown but she was a far nicer person than him. Shortly before she died she suffered a stroke attributing it to the election of Donald Trump!James Brown would probably have voted for him had he still been alive.

That's the last physical Jones on the shelves but I have got a good few digitally so this series will continue albeit in a slightly different format.

Sharon Jones & the Dap- Kings - What Have You Done For Me Lately?

Sharon Jones & the Dap-Kings - Give it Back