Albums on both Vinyl and CD - Standing on a Beach 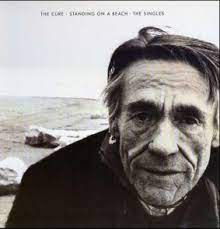 My recent CD purchase of Combat Rock plus my on-going cataloguing has highlighted that there are a number of albums on the shelves which I have in both vinyl and CD format.I've not counted them but I think that there are in excess of 30 which should make for a reasonable series that shouldn't involve too much work on my part. Also they cover a variety of formats which is good and I will  post them in a reasonably random way

It some cases there may well be a rational explanation as to why there are two copies and if so I shall share that with you. In a few cases there will be no explanation that I can think of and that will be fine too.

Let's start then with Standing on a Beach-The Singles by The Cure from 1985 on the Fiction label. It does what it says on the tin -13 singles from between 1978 and 1985 on the vinyl album and 17 on the CD. For some that would be a good enough reason to acquire both but not in this case.

I'm not 100% sure on this one but I think the vinyl came from a pile belonging to Mrs CC and her sister when her mum was moving house. I think that the CD also came from Mrs CC's sister (suggesting that she was the fan)  as I got their CD collection when they went digital. I'm beginning to sound a bit like George there in acquiring other people's records.

For the record I quite like the Cure but I've never got round to picking up anything by them and these two versions of Staring at the Sea will probably suffice.

The Cure - In Between Days