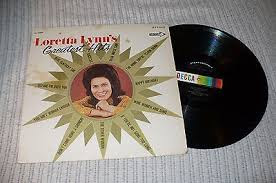 Here I Am Again by Loretta Lynn is a recent purchase and one of the inspirations for this series.However, I haven't had the time yet to give it a proper listen and I wasn't particularly impressed with the first listen.

So time for Plan B - Loretta Lynn's Greatest Hits on Decca from 1968
One I've featured before and the first of many, many Greatest Hits collections I suspect and featuring songs from 1962 to 1966
Peaking at #6 on the Billboard Country Charts but not troubling the Billboard Top 200 although it did sell over half a million copies.
Loretta may feature again if Hear I Am Again improves on subsequent listens.

Loretta Lynn - The Home Your Tearin' Down