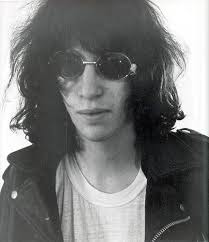 It's time for an arbitrary rule change.
For this series I have now decreed that a song namechecking someone which has previously featured on CCM can feature again PROVIDING it is accompanied by another song namechecking the same individual!
Controversial
So today we have the previously featured I Wanna Be Your Joey Ramone by Sleater- Kinney accompanied by the new to CCM  Dancing With Joey Ramone by Amy Rigby whom I believe is now Mrs Wreckless Eric

Joey himself has previously featured with General Johnson with The Godchildren of Soul and of course with the Ramones.
Here he is with the Bruddas

Sleater-Kinney - I Wanna be your Joey Ramone