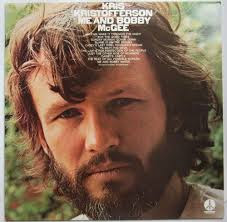 Kris Kristofferson turned 80 on 22nd June. Increasingly frail and suffering from Lyme disease I had the honour of witnessing a couple of cameo performances by him at this year's Celtic Connections.

He effortlessly and supremely coolly reeled off several of his classic songs most of which feature on my vinyl  copy of the compilation Me and Bobby McGee.
The back cover features a very ropey poem by Johnny Cash which I won't trouble you with. Safe to say that Bob Dylan has nothing to worry about.
My favorite song of his and also the favourite of some of my esteemed colleagues is  the majestic Sunday Morning Coming Down.
It has featured before so instead you are getting the two below which I am sure you will agree are not too shabby.
Show me someone who does not like Kris Kristofferson and I will show you someone with no soul

Kris Kristofferson - Just The Other Side of Nowhere

Kris Kristofferson - The Best of All Possible Worlds
Posted by Charity Chic at 08:00