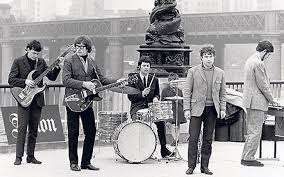 Before he was a knighted grumpy old Irishman Sir George Ivan Morrison  OBE  was a young grumpy Irish commoner who from 1964 to 1966 was lead singer of the garage band Them.

During that period they released ten singles and two albums with a further two singles after Morrison's departure. Here are the pick of the bunch.
Even before he had left there were two different versions of the band with one having to call themselves The Other Them following legal action.

Van's people are notorious for scouring T'internet and taking exception to anything posted about him. Hopefully this does not extend as far back as Them.

Them -Here Comes the Night
Posted by Charity Chic at 08:00