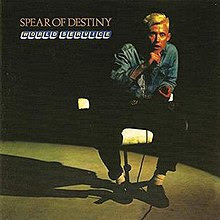 When I featured One Eyed Jacks by Spear of Destiny as far back as November 2015 I commented that I had another album of theirs called World Service which I said I must get round to listening to sometime.

Well it has finally happened. I gave it a listen to earlier this week. The things you do when you have a week off work in lockdown and there is nothing open.

As I commented previously it came as a bit of a surprise to stumble across this as I had no recollection of it. There is a scored out Eastwood Distict Libraries sticker which may mean that if I didn't buy it it came via Mrs CC or her sister.

From 1985 and on the Epic label it is the bands third album and the follow up to One Eyed Jacks and reached the UK top 30. Here is a little bit more info from Louder than War on the occasion of the release of the 35th anniversary re-issue.

I can't say it doeas much for me and as the review says it is bogged down on mid-80S production. There is certainly nothing on it of the class of Rainmaker or the mighty Liberator.

It might take another lockdown for me to dust this one down again.

Spear of Destiny - All My Love (Ask Nothing)