Even More Sounds of the City 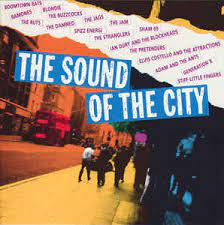 The third and final instalment from The Sound of the City compilation featuring the songs/and or artists who have never graced thes pages before. We will do them in the order that they come up on the album.

First up is The Pretenders with Brass in Pocket. I don't know why but I never really took to them which is strange as there are far worse bands, their songs are by and large ok and Chrissie Hynde seems quite sound apart from the abberation of marrying Jim Kerr. The nearest I ever got to seeing them was listening to them from outside the Free Trade in Newcastle with George as they played across the Tyne in Gateshead.

The band making their debut are Generation X. Billy Idol has also never featured before. My pal Raymie, who gave me Radio Clash. has blonde hair. He was once accosted by a Glasgow urchin who looked him up and down before proclaiming "Gen X, big man" Ah, the banter!

Last but be no means least we feature Stiff Little Fingers a band fronted by Jake Burns who was born in Belfast but spent many years in Newcastle before moving to the States. He took out American citizenship so he could vote against Trump.

I'm in two minds as to whether to keep this going of a Saturday with a similar, but better, compilation and would welcome your views.

The Pretenders - Brass in Pocket

Generation X  -Dancing With Myself