This is Radio Clash 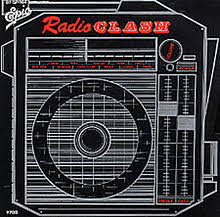 My pal Raymie had a fairly eclectic record collection.

One reason maybe tha his family were friendly with a Radio Clyde DJ Frank Skerret whose musical tastes were such that he thought The Carpenters were punk rock.

This connection led to a few promos and records coming Raymie's way and on occasions there were doublers. One such doubler was the 12 inch version of This is Radio Clash which I was happy to take off his hands.

Side 1 containes This is Radio Clash and Radio Clash a remix with additional lyrics. It was the intention of the band that they be heard as a single entity and who am I to argue?