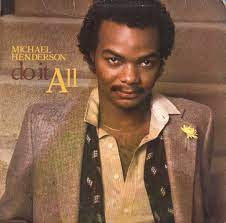 Sadly we are rapidly nearing the end of Val's vinyl but not before we have a couple of slices of soul funk fusion.

Michael Henderson is a new name to me. It seems that he is an American bassist best known for his bass playing on Miles Davis albums in the early 70's.

He has also recorded with Stevie Wonder, Aretha Franklin,Marvin Gaye and Dr John so a pretty impressive CV.

This album has late 70's soul written all over it and is one I suspect that will not be a keeper.

Michael Henderson - Do It All