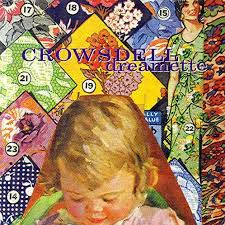 In the comments from my recent Waxahatchee post George queried whether I thought that there were similarities with Crowsdell. Regular Friday night commenter Spence  felt that there may be a similarity. I didn't feel that I could comment as I hadn't  listened to the only thing I have by them the 1995 album Dreamette on the Big Cat label in the longest time.

I've now given Dreamette a listen and to be honest I'm not really hearing the comparison. They remind me more of the likes of Hole and Pavement (maybe the later is not surprising given the album is co-produced by Stephen Malkmus). I'm thinking that they are slightly more grungey than Americana and that a shelf transfer is perhaps required