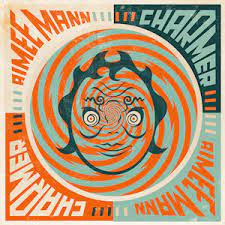 Recently we've taken to  listening to playlists from the old I-pod over dinner. It is excellent exercise as I am constantly getting up and wandering over to see who is singing.
One such artist who caught my eye recently was Aimee Mann.I have acquired a couple of  her albums in charity shops and also have a couple of burns.
One such album is Charmer the 8th out of the 9 studio albums that she has released. It is from 2012 and is on the Superego label.
Her music is of a consistantly high standard but has never really had the recognition or commercial success that she probably deserved. Having said that she has one two Grammy awards and in 2006 she was named by NPR as one of the world's greatest living song writers. She must be doing something right.
She used to be one of those artists who had posts taken down by the Blog police.If there are no links below maybe she still is. However in these days of Spotify where artists get buttons for tens of thousand streams maybe she'll cut me some slack as I extol her virtues and promote her music.
Aimee Mann - Charmer