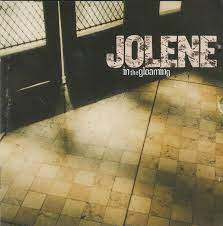 Sorry to disappoint you but In the Gloaming is not a collection of Scottish Country Dance music but is in album  by North Carolina Americana band Jolene.

From 1998 In the Gloaming is their second album and their first for one of the big boys namely Sire.They only lasted briefly there before being picked up by the great German Americana label Blue Rose.

There are fairly obvious comparisons to early R.E.M. and Wilco which is no bad thing with Allmusic describing their music as  guitar-based songs set in a rural America that many of us see, but all too often take for granted.

I've also got the 2000 album Antic Ocean.All available for buttons on discogs

Along with Nadine they remain one of the only two bands that I've seen in Helensburgh.