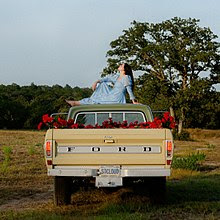 Waxahatchee, the band fronted by Katie Crutchfield released their 5th album Saint Cloud  on the Merge label about this time last year .

The Robster is a huge fan and he gave this album the high accolade of naming it his album of 2020. He pointed out that that it has a distinct Americana  feel about it and that it would be right up my street and he is totally right there.

As it is still a relatively new album I'm only sharing the one track namely Can't Do Much. I only have one other album of hers/ theirs Ivy Tripp the 3rd album from 2015. They first came to my attention via an Uncut compilation.Poison is a track from that one.

The St Cloud in the title is not the city in Minnesota which Gretchen Peters got a bus to but a small community just outside Orlando in Florida where her father comes from.

Waxahatchee - Can't Do Much

Gretchen Peters - On a Bus to St Cloud