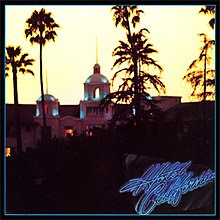 Unlike many of the Blogging fraternity I do not have a pathalogical hatred of the Eagles. Indeed, I would go as far as to say that I actually quite like some of their earlier stuff. However I'm not that fussed about Hotel California (1976,Asylum) particularly the title track where the cocaine clearly kicks in.

Val on the other hand is clearly a fan being the previous proud owner of the album. I was going to say that she was one of the 32 million to purchase the album (the equivalent of the population of Peru, Angola or Malaysia), It turns out she was not as there is a poster with the album, which has actually been on someone's wall, with the name J.K.Lindsay on the back..The same name is also on the inner sleeve..Therefore I appear to be at least the third owner.

Eagles - Life in the Fast Lane