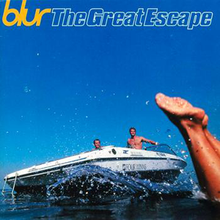 Over the years I've picked up the entire Blur discography with the exception of their final album The Magic Whip. I can't say that I'm bothered that I don't have it but if I saw it cheap I would probably nab it for the sake of completeness.

A couple of them are still to feature here one of them being The Great Escape their 4th album from 1995 on the Food label. The one which featured Country House their first number one single  beating Oasis' Roll with It when Britpop hype was at its peak. Thereafter they began to become more experimental with the cracks in the band beginning to show

Critical acclaimed at the time of release  selling nearly half a million copies in the fist month following its release but maybe one which has not stood the tests of time.

Having said that I quite enjoyed listening to it, and in particular the singles, for the first time in ages.

Email ThisBlogThis!Share to TwitterShare to FacebookShare to Pinterest
Labels: The