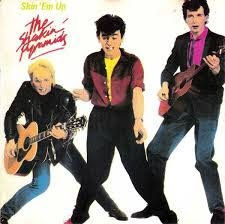 It's been  a fairly eclectic week on CCM so what better way to finish it off than with a bit of Glaswegian Rockabilly.

Skin 'Em Up! is the 1981 debut album from The Shakin' Pyramids on the Cuba Libra label (an off shot of Virgin)

Released to rave revues including this from Trouser Press the album pounds furiously, putting your average megawatt metal band to shame. Songs — mostly non-originals — zip by at a blinding rate; the record's only flaw is its brief running time. Then again, if brevity be the soul of this music, the Shakin' Pyramids are a rockabilly Ramones .The reference to the running time is because it is only 29 minutes long.

in total they released two studio albums, 3 EPs, 4 singles, a compilation album and a live one. A copy of this one is all I have and yes it is courtesy of my brother