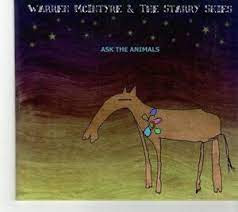 Earlier this year Ernie Goggins drew my attention to an album called Do it With Love by Starry Skies on the basis that "they come from your neck of the woods".It is a very pleasant listen

I responded that I had an album Ask The Animals from when they were known as Warren McIntyre & the Starry Skies (Mecca Holding Co,2012) but that I hadn't listened to it for a while. I have now  and very good it is too.

I nearly saw them once at  the Come Rain Come Shine event at Kelvingrove Park but the need for curry and beer won out. To assuage my guilt I purchased a copy of the album.

Warren has met Chuck Berry at a crossroads and has been asked to dance on stage with Nina Simone which sounds a bit like an introduction from Only Connect.

Some further information from is this music? and Murray Easton's excellent Everything Flows blog for you. The entire digital discography is available at Bandcamp for a very reasonable price.

Warren McIntyre & the Starry Skies - Let Love Come Back to You