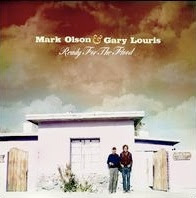 I always associate The Jayhawks with Gary Louris, Mark Olson and Marc Perlman.
It is easy to forger that Olson left the band in 1995 with his successor Tim O'Reagan having been a member for longer and having featured on more albums than he did.
Therefore it was good to see Olson back together with Louris in 2008 for a collaboration Ready For The Flood on the New West label
Allmusic gave the album 3 out of 5 with Mark Denning stating that the album was unlikely to disappoint fans of their old band. But while they mine a thoughtful country-folk vein that's not far removed from Jayhawks territory, Olson and Louris take a somewhat softer, more acoustic-based, balladic approach here than they did in the Jayhawks days, lending Ready for the Flood a warm, honeyed glow
Paste  gave it a slightly more generous 8.5 out of 10
Olson joined the band again from 2009 to 2012 during which time the album Mockingbird Time was released in 2011.
Not to be confused  with Marc Olsen as my pal Goggs once did buying his 1999 album Didn't Ever.. Haven't Since
Mark Olson & Gary Louris - Saturday Morning on Sunday Street

Mark Olson & Gary Louris -When The Wind Comes Up