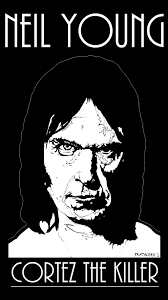 If you were to put me on the spot and ask me what my favourite Neil Young song was I would probably plump for Cortez the Killer although it would be closely followed by Powerfinger.

The original from the 1974 album Zuma is a fairly gentle affair. The same, however, cannot be said about the  live version om 1991's Weld

However for me the definitive version is from another live album 1979's Live Rust. Unfortunately that one is not on the shelves at the moment something that I really need to rectify. I used to have it on cassette. There is a story there which I will save for when I get round to re-acquiring it.

Interestingly on Weld Cortez is followed by Powderfinger whereas on Live Rust it is the other way round. Two songs that were clearly meant to be together in whatever order.