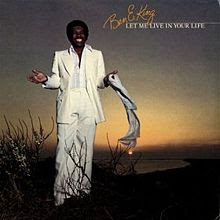 Val is back on safer ground this week after her short dalliance with the Christian Pop of Amy Grant.

We are back on the Soul train this week albeit late 80's soul which was not it's greatest era. The artist featuring is one Benjamin Earl Nelson better known to me and you as Ben E King. Yes indeed the man who sang Spanish Harlem and Stand by Me. Nothing of that quality here today unfortunately.

From 1978 Let Me in Your Life is his 11th solo studio album and the 4th on the Atlantic label.I can't find very much about it on the internet other than Allmusic gives it 3 out of 5 albeit with no review..

I've gone for two of the three songs written and produced by Lamont Dozier originally for the Motown group The Originals which are as you might expect the best tracks on the album.Background vocals courtesy of The Jones Girls

Ben E King - Let Me Live in Your Life