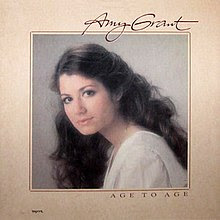 I'm not adverse to featuring a bit of Gospel on occasion on a Sunday but I think that this may be this first (and last) time that Christian Pop has graced (see what I did there?) these pages.

And who better that the Queen of Christian Pop herself Amy Grant with her 1982 album Age to Age on the Myrrh label.(£1.50 Fishers of Men Christian Charity).

Presumably Val was seeking some redemption after her Janet Jackson Nasty period.

The album that ushered her into stardomand also contrbuted to the creation of the mold for the modert Contemporsry Christian music star. Not only that, voted number 92 in the 2001 book CCM Presents:The 100 Greatest Albums in Christian Music (a must read).

It seems that Amy slightly dented her Christian credentials by divorcing and then marrying Vince Gill. I'm not sure which caused the most offence.

Pretty sure I've had a kebab from the El Shaddai