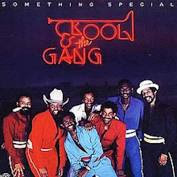 The third instalment from Val's Vinyl is the first one which was randomly selected to accompany dinner. Unlike Cuba Gooding I suspect that most of you are familiar with this week's act

Something Special from 1981, on the De-Lite Records label, is the thirteenth album by Kool & the Gang and their third consecutive platinum album after Ladies' Night and Celebrate.These three albums cover the period 1979 to 1981 when disco was probably at it's peak although Wiki describe Something Special as post-disco,urban,funk and R&B

It was their first hit album in the UK on the back of the success of Get Down On It peaking at number 10.

Needless to say this one's a keeper

You can have it if you want it.- satisfaction guaranteed

Get down on it

Kool & the Gang - Take My Heart