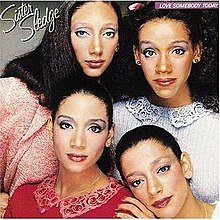 We are out of the chill out zone and back on the dance floor this week with Sister Sledge.
Love Somebody Today from 1980 is the fourth studio album by the band joining their third We Are Family on the shelves.
On the Cotillion label (a division of Atlantic) it was written by the legends that are Nile Rogers and Bernard Edwards.One of the four albums that the Chic duo put out that year along with albums by Sheila B Devotion, Diana Ross and Chic themselves. Diana Ross got Upside Down and I'm Coming Out. It would have been good to see the sisters tackling those songs.
It is pleasant enough but gets a bit Jazz Funk in places and may have benefited from the tracks being a couple of minutes shorter.You would be knacked dancing to the first one in particular.
I guess you could say that the sisters reached their peak with We Are Family.
Sister Sledge -Got to Love Somebody
Sister Sledge - Reach Your Peak
Posted by Charity Chic at 08:00