50 Americana Albums to Hear Before You Die - Walk Alone 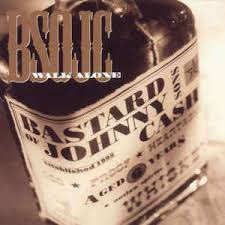 Three albums to go to complete this series and at least one of them is a bona fide classic. Maybe not this one though.

But wait the Bastard Sons of Johnny Cash as described by Rolling Stone as pure Americana heart and soul. Wiki  states that they are an Americana/alternatve country band so there you go naysayers (you know who you are)

Fronted by Mark Stuart they received permission from rthe great man himself to use his name and he personally invited them to record songs for Walk Alone at his home in Henderson, Tennessee.  Bonus tracks on the album were produced by his son John Carter Cash That's good enough for me.

Walk Alone is their 2001 debut full length album on Ultimatum Music//Artemis although they had a 6 track demo EP from 1996 and a 9 track Lasso Motel from 1999 both released indepedently by the band.A furher five albums were released up to 2013 along with 3 live ones.

I saw them playing live at Glasgow's ABC 2 which has now been sadly demolished after being caught up in the second Art School fire. I think William Elliott Whitmore may have been the support act