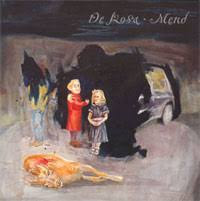 The first offering from the final holiday haul today. A successful foray into the BHF shop in Fort William on the way home proved to be fruitful.

De Rosa have osbscurely crossed my radar a couple of times over the last few months.When Alisdair Gray died I went looking for a track I was sure I had by them called Lanark in tribute to his greatest work. Turns out it was in fact called New Lanark and I couldn't find it.

Then in an e-mail chat with Lloyd Meridith heid honcho of Olive Grove Records following my purchase of a Henry and Fleetwood EP he said that he had been a fan of Martin John Henry from his De Rosa days.

So it was a no brainer when I spied their June 2006 debut album Mend on the Chemikal Underground label on the shelves.

Voted by Mojo as the 16th best album from 2006.As well as  Martin John Henry (vocals, guitars and keyboards) the band consisted of James Woodhouse (bass) and Neil Woodside (drums) who I assume are brothers.They look similar in the pictures on the CD inner sleeve