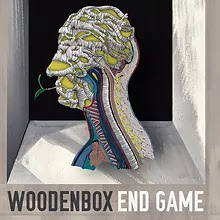 Today's offering is not a charity shop purchase but did come to me in a charitable sort of a way. Let me explain.

A few months ago I ordered something from Olive Grove Records . I can't remember which purchase it was off hand but when it  arrived Lloyd had thrown in End Game a 2013 album by Woodenbox  free gratis and for nothing.

I gave it a quick listen, stored it away and forgot all about it. I revisited it again recently and was very impressed with what I was hearing and it has been played several times since.

After a hiatus they are scheduled to  re-release their debut album Home and the Wildhunt on Olive Grove soon.

Woodenbox - Everyone Has a Price