50 Americana Albums to Hear Before You Die - Furnace Room Lullaby 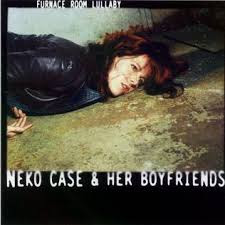 Furnace Room Lullaby from 2000 is the second album from Neko Case and her Boyfriends following on from 1997's The Virginian. Both were released on Chicago's Bloodshot label under licence from Mint Records in Vancouver..

By my reckoning after Ryan Adams she is probably the artist from Bloodshot who went on to have the most fame and recognition.

Wiki only gives a cursory mention to the two albums featuring her Boyfriends band focussing instead on the next album Blacklisted and its successors. To me, however, these two are her best with Furnace Room Lullaby just shading it. She says of the title track that she wanted to write a murder ballad as she was such a fan of the Louvin Brothers. That statement alone merits her place in this series.

The lyrics are certainly reminiscent of the Louvins, dark and with a gothic feel to them with each song touched by personal tragedy and propelled by a peculiar desperation. (Pitchfork) Twist the Knife is a brilliant example.

Travis and Dallas Good of the Sadies, her great pal Kelly Hogan and Ron Sexmith are among those lending their talents to this record

As well as  recording with the Boyfriends and as a solo artists  she has appeared regularly as a member of the Canadian act The New Pornographers, with Carolyn Mack as the Corn Sisters, with the Sadies and as a third of case/lang/viers.

This still remains my favourite record by hers

Neko Case and her Boyfriends - Set Out Running

Neko Case and her Boyfriends - Twist the Knife

Neko Case and her Boyfriends - Thrice All American