Push The Sky Away 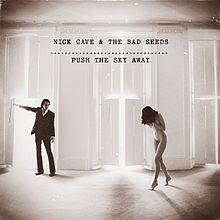 Although there are now five Nick Cave albums on the shelves either belonging to me or Mrs CC (six if you include Grinderman; there is also the CD single Henry Lee with PJ Harvey) I wouldn't describe myself as a huge  fan.

I feel that he has got a big hit for himself and that some of his stuff can be pretentious twaddle. However I was not going to pass by a sealed copy of Push the Sky Away his 15th studio album from 2013 on the band's own Bad Seeds Ltd label.

On this one we get the mellow Nick as opposed to the thrashy Nick. Barry Adamson appears for the first time since 1986 but it is the band's first album not to feature Mick Harvey. The cover shows Cave opening a window shutter to illuminate his naked wife. What was I saying about pretentious?

I think it is pleasant enough background music but given its critical acclaim I should perhaps spend some more time with it to see if it becomes a grower.

Nick Cave & the Bad Seeds -We No Who U R