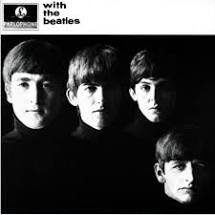 There are no charity shops in Lochcarron or the surrounding villages so the only one visited during the second week of our holiday was the Blythswood Care shop on Broadford on Skye which we visited en route to the Old Inn at Carbost beside the Talisker distillery.

Now I am on record as not being a Beatles fan but Mrs CC is so it seemed foolhardy not to pick up a number of their CDs which were on the shelves.

Somebody had obviously fairly recently handed in their Beatles collection and we came away with With the Beatles (1963),Beatles for Sale (1964), Rubber Soul (1965),Revolver (1966), The Beatles 1967-1970  and  the second and third double CDSs of The Beatles Anthology.  Don't  worry I'm not going to feature them all. Mrs CC also got a Denby tea set so she was happy.

The nice gent who served us was looking forward to his wife getting out of hospital the next day. Hope she's home and feeling well

The Beatles - All My Loving

The Beatles - Roll Over Beethoven