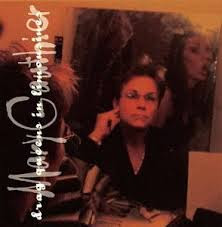 I acknowledge that there has been a bit of a debate as to whether the last couple of albums in this series were actually Americana.They probably weren't. There can be no debate this week. If you were to look up Americana in the dictionary there is a fair chance that the description would simply read Mary Gauthier.

Drag Queens in Limousines from 1989 is her second album and was released on Munich Records.As Country Standard Time says it was not what at the time passed for typical fare.

I've previuosly written the title track may well be autobiographical given that she ran away from her adopted parents and lapsed into a world of drugs and alcohol spending her 18th birthday in jail.

I Drink is almost certainly autobiographical given her battle with the bottle. Thankfully she managed to turn her life around given that she has been sober from 1990. She wrote her first song at the age of 35.

I've seen her a few times.Fairly early in our relationship I took Mrs CC to see her at the Arches. We had to leave as she found it too depressing.
Obviously when it comes to Americana the more depressing the better (despite what Uncle Tupelo say).
If you like your country music real and gritty, and yes depressing then Mary Gauthier ticks all the boxes.
Mary Gauthier - Drag Queens in Limousines
Mary Gauthier - Our Lady of the Shooting Stars
Mary Gauthier - I Drink
Posted by Charity Chic at 08:00