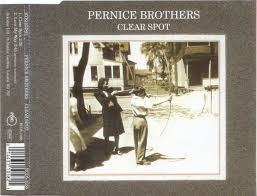 It's beginning to look like CD single week on CCM

The second of the two Dingwall CD singles is Clear Spot a song from the Pernice Brothers debut album 1998's Overcome By Happiness.

It is entirely possible that  this single was handed in by the same person who handed in  purchase 51 picked up in Muir of Ord a mere 7.5 miles south.

Dingwall has always been a rich hunting ground for Americana purchases.Previous visits have provided music from the Guthries, Loomer, Jim White, Alana Davis and the Redlands Palimino Company.I think this is because there used to be a community hub called the Greenhouse which may have hosted a community radio station. The fact that some of the purchases are promotional copies adds wait to this supposition.

This should please Rol who apparantly loves the Pernice Brothers