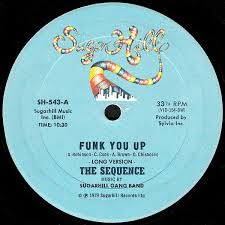 Given that I don't have any prog rock and very little in the way of psychedelia on the shelves I don't often participate in this feature.

However the Mojo Almost Famous compilation which I featured on Friday contained a track which fits the criteria and which is worthy of inclusion.

From 1979 Funk You Up by The Sequence on Sugarhill was the first hip-hop  song to be released by a female rap band. It was the second single on the  Sugarhill label following on from the brilliant Rapper's Delight by the Sugarhill Gang.

The three rappers were Southern gals from South Carolina namely Cheryl "the Pearl" Cook, Gwendolyn "Blondy " Chisolm and Angela "Angie B" Brown the lead singer who later went on to record as Angie Stone. I have Black Diamond one of her CDs on the shelves bought for a fiver from Europa Records in Stirling. I must give it a listen.

The Sequence - Funk You Up