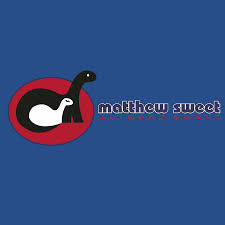 Some power pop for you today as we feature Matthew Sweet with Altered Beast his 4th album from 1993  on the Zoo Entertainment label. The album cover comes in five different colours (yellow,blue, green, orange and purple). As the picture above suggests my copy came in blue.

The follow up to Girlfriend (which I've still to get) it was released to mixed reviews with a score of  4/5 from Allmusic and 3/5 from Rolling Stone.

Rolling Stone stated that it had inspiring moments, the problem is finding them. Allmusc felt that the album was all over the place and it takes a bit of time for all of it to make sense , but after a few listens it falls together.

That is somewhat reassuring as after being pretty chuffed to find it after a first listen I was not entirely convinced. It is certainly a bit of a curate's egg. I hold Mr Sweet in high regard so I shall persevere.

Matthew Sweet - Do It Again