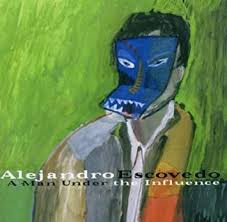 The final album in this series and it is a cracker.

Ladies and gentlemen I give you Alejandro Escovedo voted in 1998 by No Depression magazine as Artist of the Decade with his 2001 album A Man Under the Influence on the Bloodshot label, the label which has easily had the most featured albums in this series.

Let's look at the plaudits

Billboard  - the best studio performance Escovedo has ever produced

Pitchfork - it's well-played, well-written, solid music from a certified veteran.

Allmusic - Quite simply,Escovedo has never sung better than he does on this set, running the emotional spectrum from plaintive longing to swaggering contempt and never sounding less than convincing at any stop along the way.  Each of this album's 11 songs is worth hearing, and the cumulative effect is nothing less than stunning

Bloodshot -  this album stands as one of cornerstone achievements of a singer and songwriter not lacking in achievements.

But hey don't listen to them. Give it listen and judge for yourself. If you are not convinced then there is no hope for you. In your letter to Santa tell him it's available from discogs from as little as £2.35

An artist I've seen a few times . Twice in Austin when his Continental Club Sunday night concerts after SXSW where his version of I Wanna Be Your Dog with Chuck Prophet is the stuff of legends  and twice in Glasgow. The first time in Glasgow was at King Tuts in November. This tiny man with a fur hat came in through the front door. I have never seen anyone looking so cold in my life

This concludes my 50 Americana Albums to Hear Before You Die series. I hope you've enjoyed it and enjoyed listening to old favourites or discovering new ones.If you are interested in playlists from this series drop me a line.

Who knows I may return with another  50.Maybe Americana Albums  but maybe Country but they are on the blue shelves so they count to Hear Before You Die series in due course