See This Through and Leave 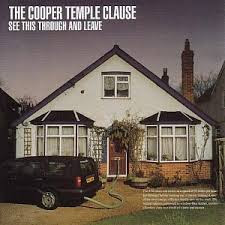 This one was a mistake. I confused them with The Temperance Movement who I was interested to hear after seeing their former frontman Phil Campbell at Celtic Connections

The Cooper Temple Clause were from Wokingham and Wiki describes them as post-hardcore/new prog/space rock  (you can see where this is going).

See This Through and Leave was their debut album from 2002 on Morning Records. Thankfully they only released another two before splitting up in 2007

See This Through and Leave ? Sorry I never made it to the end of the first track. To make matters worse there is a bonus disc.

Let's Kill Music? They give it a bloody good try.

Absolutely dreadful and unlistenable (if that is a word). It's going back. I will not subject you to more than one "song"