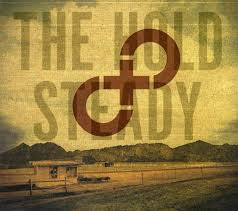 2020 Charity Shop Purchases 67 - The Hold Steady = Stay Positive
The more sad   eagle -eyed among you may be thinking "what's going on here? He only featured Stay Positive the 4th album by The Hold Steady from 2008 on Vagrant/Rough Trade as recently as February  last year. Why so soon again?"
The reason is simple. The last time round it was a  copy which George had very kindly pushed in my direction. I was familiar with the name but not the music and was pretty impressed especially with the track Sequestered in Memphis.
Then I saw Craig Finn appear as past of the Roaming Roots Review tribute to Bruce Springsteen and was totally blown away.
Therefore it was pretty much a no -brainer to upgrade my  copy when I saw it during my last charity shop foray.
I've featured Sequestered in Memphis twice already here and although I am sorely tempted to post it again there are a number of other good songs such as the two below which deserve an outing.
Eyes now peeled for other albums by them
The title of the album is something we should all be aspiring to no matter how hard that currently is.
The Hold Steady -Constructive Summer
The Hold Steady - Slapped Actress
Posted by Charity Chic at 08:00