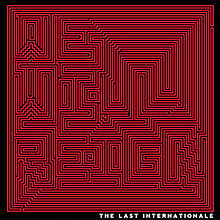 After yesterday's debacle we need something to cleanse the palate.

And what better that We Will Reign the 2014 debut album on Epic Records by the left wing Brooklyn agitators The Last Internationale. I gave it it's first listen in ages following downloading some live tracks and was blown away.

A band who were brought to my attention by my late pal Harry who saw them supporting Robert Plant in Glasgow.

The Last Internationale are Delia Paz on vocals and Edgey Pires on guitar wth Brian Wilk who has played with Black Sabbath and Rage Against the Machine guesting on drums.

The cover of Sam Cooke's A Change is Gonna Come is not on the album but I thought I would share it with you as it is something very special indeed.

The Last Internationale - We Will Reign

The Last Internationale - A Change is Gonna Come