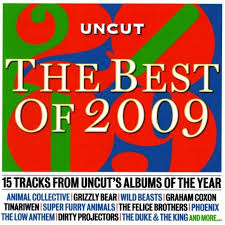 2020 Charity Shop Purchases 68 - Various : Uncut - The Best of 2009.
We sre nearing that time of the year when folk start to compile their best of lists for the year. As CCM is often a bit behind the times I give you The Best of 2009.
I'm a bit of a sucker for these if only to see how many I recognise. In this case I am probably familiar with around half of the acts  but only have physical  music by the Super Furry Animals.
I thought I might look at featuring tracks from those new to me artists but this largely proved to be unfruitful.
So first and second up two acts that I have copies of records by.. The Felice Brothers always appear to be a bit of an enigma to me. Any track of theirs I hear I like yet when I got a copy of their Favorite Waitress album I was largely disappointed. This selection from Yonder Stands the Clock however is rather good.
I got Oh,My God,Charlie Darwin by rhe Low Anthem from the record library when there was such a thing. I played it a couple of times and stored it away. I don't particularly recall To Ohio but I probably should.
I have nothing by Tinariwen and that requires to change. Perhaps Imidiwan:Companions would be a good start. I need some North African desert blues in my life!
The Felice Brothers -Cooperstown
The Low Anthem - To Ohio
Tinariwen - Tenhert
Posted by Charity Chic at 08:00