The Trials of Van Occupanther 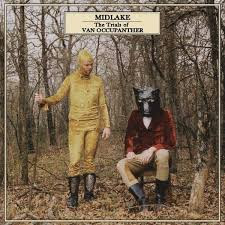 Recent references to The Trials of Van Occupanther  in a posting by the Great Gog at JC's place and my featuring of it from the compilation White Winter Hymnals had me popping across to Discogs for the first time this year to pick up a copy.

The second album from 2006 by the Denton, Texas band Midlake on the Bella Union label it seems already to have acquired semi-legendary status.

There are comparisons to the Laurel Canyon sound and to the likes of Fleetwood Mac,Peter Hammill, The Blue Nile, Radiohead and Grandaddy.

I'm glad I didn't read all that beforehand as with the  exception of Laurel Canyon and Grandaddy that would have probably put me off.

The Guardian states that  the songwriting is rich, delivering an almost hallucinatory mix of pianos, horns, guitars and painfully wistful reminisces. This could well end up one of 2006's best.

Pitchfork praised Roscoe but little else. Bella Union on the other hand lists a number oif admirers and suggests that it's influence has perhaps been felt in the breakthrough of many a band or singer at one with the stuff of beards, bucolic yearning and blissful West Coast harmonies, from Fleet Foxes to Band of Horses, The Low Anthem, Jonathan Wilson, Matthew E White and beyond.

Heady stuff. For what it's worth I like it and I'm glad I took the plunge

Midlake - In This Camp