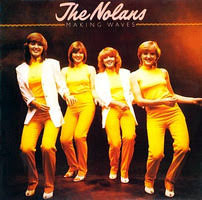 A bit of a dilemma this week as Val's Vinyl contains not one but two albums by The Nolans.I'm not quite sure what came over me says Val

Which to choose? As you can see from the picture above I've gone for their 1980 album Making Waves on the Epic label, the other album being the 1982 follow up Portrait. Featuring the classic line up of Bernie (RIP), Maureen, Coleen and Linda

It was a close call but how can you ignore an album which went gold  and which reached number 2 in Sweden and Ireland and number 1  in New Zealand and Japan. Unbelievably it sold over 5 million copies  with over 100,000 in the UK and  over 550,000 in Japan.

Four top 20 singles with the two featured below both  peaking at number 9.

Tempting as it is to keep them I feel that I have an obligation to share the love.

Anyone on the mood for dancing, romancing?

The Nolans - Gonna Pull Myself Together

The Nolans - Attention To Me