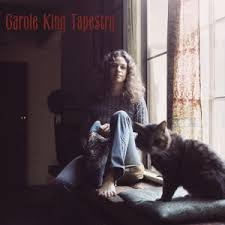 Tapestry the 1971 album on A&M by Carole King is one of the best selling albums of all time having sold over 25 million copies world wide.

One belonged to my trendy and glamorous Aunt Jean and other belonged to Val. Most of Val's vinyl is in pretty good condition but I would describe her copy as much loved. However, I feel that the snaps,crackles and pops merely add to the attraction.

Carole King was one of the best songwriters of her, or indeed any generation. Probably best known for her Brill Building songs co-written with her first husband Gerry Goffin. She could hold a tune too.

The condition of the album influenced the songs I selected but in reality all 12 are of a similar high standard.

King wrote the music for It's Too Late with Toni  Stern the lyrics and it was one which reached number one on the Billboard singles chart. It has been covered by Gloria Estefan a version which I thankfully haven't heard.

Will You Love Me Tomorrow (not Will You Still Love Me Tomorrow as you would think) was co-written with Gerry Goffin.Another number 1 this time in  1960 for the Shirelles the fist song by an all black girl group to claim that accolade.

It has been covered by around 50 acts. Here are the Shirelles and two covers from my hard drive all titled Will You Still Love Me Tomorrow. I'll leave it to Ernie to come up with the Mandatory Reggae Version

Carole King - It's Too Late

Carole King - Will You Love Me Tomorrow

The Shirelles - Will You Still Love Me Tomorrow

Roberta Flack - Will You Still Love Me Tomorrow

Amy Winehouse - Will You Still Love Me Tomorrow