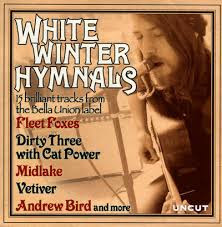 Reference was made yesterday to Fleet Foxes and the record label Bella Union. Today we are still in Muir of Ord and are featuring White Winter Hymnals the only compilation CD in the haul an Uncut compilation from April 2009

The supplementary title is 15 brilliant tracks from the Bella Union label with a little sticker remind you that they were the label who brought you Fleet Foxes and more.

No Fleet Foxes today. Rather two bands I have songs from but no albums that I am surprised have not featured before and a band I had not heard off. It also has Songs My Friends Taught Me which has prompted my to give the album Troubled by the Fire by Laura Veirs  another listen

Beach House are a dream pop duo and have appeared on an ICA by SWC over at JC's place. I have those songs and a few others on my PC but none from their eponymous 2006 debut  from where Master of None comes from.

Midlake are a folk rock band from Denton, Texas and were previously recommended to me by my friend Magoo. I haven't yet properly followed up that recommendation by after listening to Bandits from their 2006 album The Trials of Van Occupanther I really should do so

San Francisco folk band Vetiver are new to me but I was quite impressed with Sister from their 2009 album Tight Knit.

Beach House - Master of None