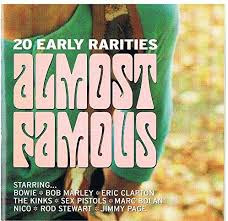 Early songs from famous artists before fame came knocking and according to the blurb songs that should you wish to buy them on originsl 45s and LPs, would currently set you back over £1500.With the vinyl revival lets up that to two grand.

Now it is fairly easy to identify most of the artists - Sex Pistols, Marc Bolan, David Bowie (who appears twice once with The Lower Third) and the Kinks among others.

Nico for instance is relatively well known.I mean to say she was a girlfriend of John Cooper Clarke for instance.There was also some involvement with the Velvet Underground and a banana. This cover of a Gordon Lightfoot song is rather lovely.

If I mentioned the band First Gear to you I imagine most of you wouldn't have a scoobie. If I said First Gear (feat Jimmy Page) it would be a different story. The song isn't much cop but the guitar solo ..

The Bystanders were a band from Merthyr Tydfil. That alone should qualify them for inclusion but apparantly they are a previous incarnation of Man. I can't say I'm any the wiser.

As I said above quite interesting

The Bystanders - When Jesamine Goes